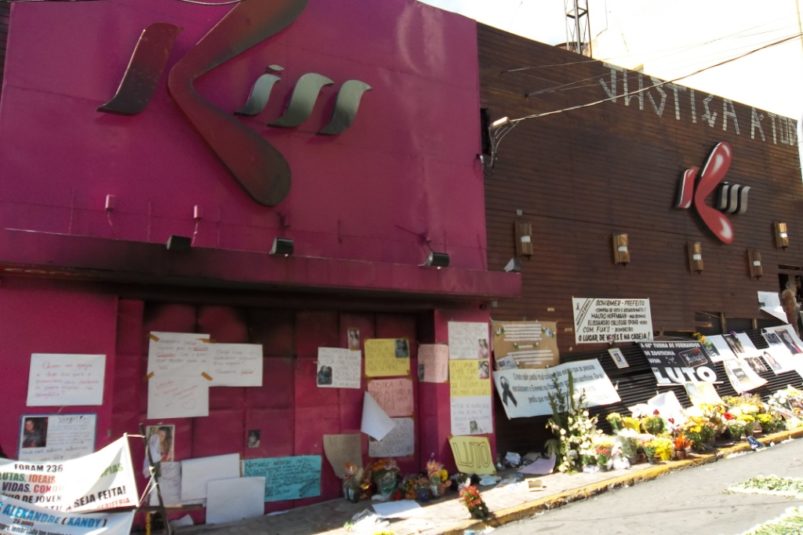 ‘My two sons went to a party. Now one is in a critical state, and the other is in a coffin’

The motto of Tanise Cielo, 23, a talented dance graduate who was one of the 231 young victims of the Santa Maria nightclub fire in Brazil, was “and if the music is good, you dance.”

Today at Santa Rita Cemetery, as her distraught mother clung to her mahogany-coloured coffin, decorated with a single red rose, her classmates played her favourite music and did just that.

The image of her friends dancing as her family held each other and wept was one of a torrent of poignant moments on a day the town held funerals for 80 of the victims – one every 10 minutes. “This tribute was a small comfort to my heart,” her mother Vera Todatto Lopes, 52, said. “I could see that my daughter was so dear to her friends. Dancing was the thing she loved to do in life.”

It was a small flutter of joy on a day the town – and country – was overwhelmed with grief. But even before the tears had dried, there was anger and calls for recriminations. Elissandro Spohr, the co-owner of the Kiss nightclub where the tragedy happened, was arrested along with Luciano Leo and Marcelo dos Jesus Santos, two members of the Gurizada Fandangueira band who were performing at the time.

The club has been accused of operating without a valid safety certificate while the band are accused of starting the fire by setting off a flare that ignited soundproofing foam on the ceiling. As the death toll was revised down from 233 to 231, a band member spoke for the first time and confirmed they used pyrotechnics during their show. Guitarist Rodrigo Martins told a radio station that the band started playing at 2.15am “and we had played around five songs when I looked up and noticed the roof was burning”.

“It might have happened because of the Sputnik, the machine we use to create a luminous effect with sparks,” he said. “It’s harmless, we never had any trouble with it. When the fire started, a guard passed us a fire extinguisher, the singer tried to use it but it wasn’t working.”

Within seconds, the fire had spread, filling the venue – which with about 500 people inside was only at a quarter of its capacity – with toxic smoke, which is believed to have killed 90 per cent of the victims. Those seeking to escape had only one exit to aim for, with a crowd control barrier intended to manage queues blocking the way directly outside the main door. Some of those who did make it out soon collapsed there from smoke inhalation, blocking the path of others. To make matters worse, for the first few minutes, security guards blocked the exit. In Brazil, clubbers accumulate a tab for their drinks, which they then pay at the exit.

Even so, that does not quite explain a remarkable claim by at least one police officer at the scene – that as many as 180 of the victims were found in the bathrooms of the establishment.

It has been suggested they suffered confusion brought on by smoke inhalation – or were simply trying to find a refuge from the smoke when they realised the main doors were blocked.

Soon, bodies of the dead and injured were strewn across the street. Most had died within minutes.

“It was terrible inside – it was like a Holocaust film, bodies piled atop one another,” said police inspector Sandro Meinerz. “We had to use trucks to remove them. It took six hours to take them away.”

Meinerz, who coordinated the investigation, said one band member, Danilo Jacques, 28, died because he returned to the building to save his accordion.

Within hours the temporary mortuary – a community sports centre – was a horror scene, with body after body lined up on the floor, partially covered with black plastic as family members identified kin. A symphony of mobile phone ringtones rang out, as loved ones desperately tried to contact their children. One mother is said to have called her child’s mobile phone 104 times.

Elaine Marques Goncalves lost her son Deivis. Another son was seriously injured. “It was a party. My sons went out to a party and now one is in a coffin and one is in a critical state in hospital. Imagine the desperation of these creatures wanting to leave but they can’t. My son will not come back but I demand justice, I want justice.”

Others were more lucky. Mauricio Gomes, 19, and Beatriz Borba, 18, left the club minutes before the fire after she began to feel unwell. Goetterms Rafaela, 19 – like 101 of the victims, a student at the Federal University of Santa Maria – skipped going to the club to revise for an economics exam.

Three of her friends are confirmed dead and another four are missing. On hearing the news she raced to the scene. “I never, ever have seen anything like it in my life. It was the scene of a war movie,” she said.

Another wave of funerals is expected tomorrow as Brazil – which has a tradition of burying its dead soon after death – continues three days of national mourning. Eventually there will be more concerted questions – for the nightclub owners, the band and the authorities. But, for now, there are just too many funerals to focus on anything else.