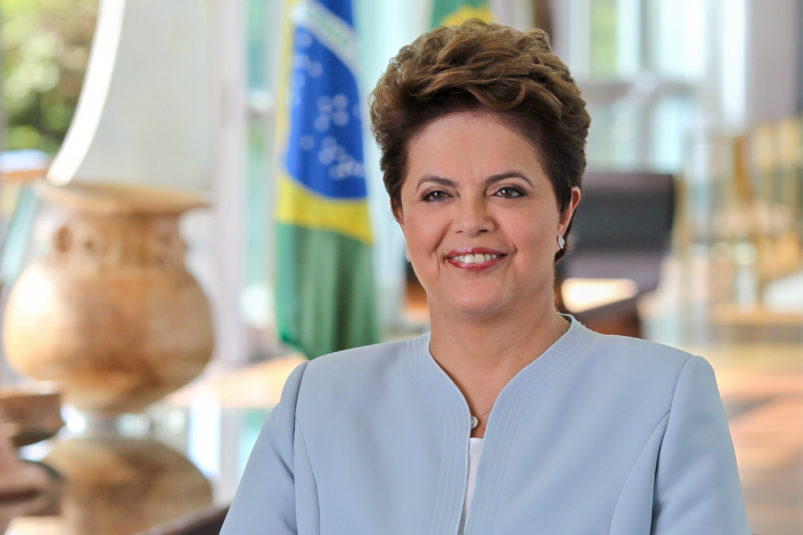 Surrounded by the modest grandeur of the Palácio da Alvorada, for now still her official residence as the President of Brazil, Dilma Rousseff’s face softens as she recalls her youth as a rebel hunted by Brazil’s military dictatorship. In a famous photograph from Rousseff’s appearance at a Brazilian military tribunal in 1969, she sits, visibly unbowed, as two judges on the bench behind her cover their faces with their hands. “She exuded defiance,” wrote Cristina Fernandez de Kirchner, the first female President of Argentina, in TIME in 2012. “The woman I got to know … possesses the same commitment as the girl in that picture.”

Much has happened since Rousseff and Kirchner met in 2003, when the Brazilian was a minister under her hugely popular predecessor Luiz Inácio Lula da Silva of the Workers’ Party. In the aftermath of her re-election in 2014, Rousseff looked set to cement the legacy of the Workers’ Party in the wake of a long economic boom that had lifted tens of millions out of poverty and, with the country set to host the Olympics, secured a new prominence on the global stage.

The past 18 months have changed all that. A vast corruption scandal at state oil giant Petrobras, which occurred when Rousseff served as chair of its board, swallowed the political class and contributed to what could be Brazil’s worst recession since records began in 1901. The investigation, known as Car Wash, revealed an entrenched web of kickbacks worth billions flowing between politicians, officials, construction firms and political parties, with her own re-election campaign in 2014 implicated in the graft.

Although not personally accused of corruption, she was suspended as President in May amid public anger and now faces an impeachment trial, beginning on Aug. 29, on unrelated charges of breaking fiscal responsibility laws. She strongly denies any knowledge of the corruption and says her removal is a parliamentary coup. Just last week her mentor Lula was arrested on suspicion of obstructing the investigation. Stripped of her power but not her office — yet — few in Brasília believe Rousseff will ever return to power.

So does the Rousseff of today still retain the determination of the girl in the photo?

“I think it’s true,” she says, speaking to TIME. “Obviously you get more …”

Her voice fades to silence. Despite her predicament, she is relaxed, composed and genial. She suppresses the faintest of smiles.

“I wanted to be identified,” she adds. “So in that sense, the girl of today is the same. Yesterday’s girl is the same as the old woman of today.”

And how has she changed in those 47 years?

“Oh, but we mature,” she says. “When we are young we have a simplistic view.”

The certainties of those days must be appealing now. Dilma, as she is widely known, was born in 1947 in the state of Minas Gerais, to a Bulgarian immigrant, a poet and businessman, and his Brazilian wife, a teacher. When Brazil’s military came to power, she joined the resistance. One prosecutor termed her the “Joan of Arc of the guerrillas.” Arrested in 1970, she refused to break under torture, including electric shocks, by military police.

Later in life she became a career bureaucrat in Rio Grande do Sul, Brazil’s southernmost state, until Lula appointed her Energy Minister in his first government. She became his chief of staff before running for President in 2010, her first elected office. The move to impeach her was first considered a long shot but gathered pace amid a growing and unfocused fury at the political class. It was led by Eduardo Cunha, the speaker of Brazil’s lower house, who has himself since been removed and is facing charges of taking $40 million in bribes in the Car Wash scandal. Cunha is of the same Brazilian Democratic Movement party as Michel Temer, currently serving as interim President and who is in line to succeed Rousseff should she be removed permanently.

The President is accused of illegally using state bank funds to cover a budget shortfall but insists she has committed no crime and directly links her battle to stay in power to the struggles of her youth. “I am not only fighting for the preservation of my mandate,” she says. “I am fighting because democracy in Brazil was very hard-won. Not only through systematic fights, but people were arrested, tortured and many people were killed. There was a whole process that resulted in democracy.”

“What is the resistance?” she asks, alluding to opposition to the military regime that finally ended in 1985. “You fight a parliamentary coup with the weapons of democracy.”

They are bold words from the leader of a political party submerged in scandal. Even before Lula was arrested last week, police in April charged João Santana, the strategist who masterminded her two election victories, with taking, along with his wife, $7.5 million in bribes from companies and businessmen involved in the kickback scheme. The clear implication was that he was being remunerated for his political success through the back door. Rousseff herself served as chair of the Petrobras board between 2003 and 2010, during the period when the mammoth $3 billion bribe scheme was operating. If she did not know about it, critics suggest, she could not have been looking very hard.

Rousseff is on firmer ground when she points out how the rowdy vote to impeach her in the lower house consisted almost entirely of Congressmen citing Operation Car Wash, their families and God as the motivation for their votes — not the actual charges against her, which she denies. “I’m sad because it gives an undesirable image of Brazil to the world,” she says. Unlike many of the Congressmen, “I do not hold any offshore accounts, have never appropriated public money and do not have irregular practices.”

Did the realities of Brasília ever lead her to make compromises she regrets? She pauses before mentioning two examples of the opposite: First, the fact that she did not restrain the Car Wash investigation, even despite its damage to her own party, a fact she says is crucial to her opponents’ desire to remove her. Second, her refusal to deal with Cunha last year, even as he was keen to strike a quid-pro-quo so she could avoid impeachment and him an investigation by a congressional ethics committee. “I systematically refused to make any agreement with Mr. Cunha,” she says.

“What you cannot do is sell your soul,” she adds. “I tried to make compromises and concessions with those who had a vision of a better Brazil.”