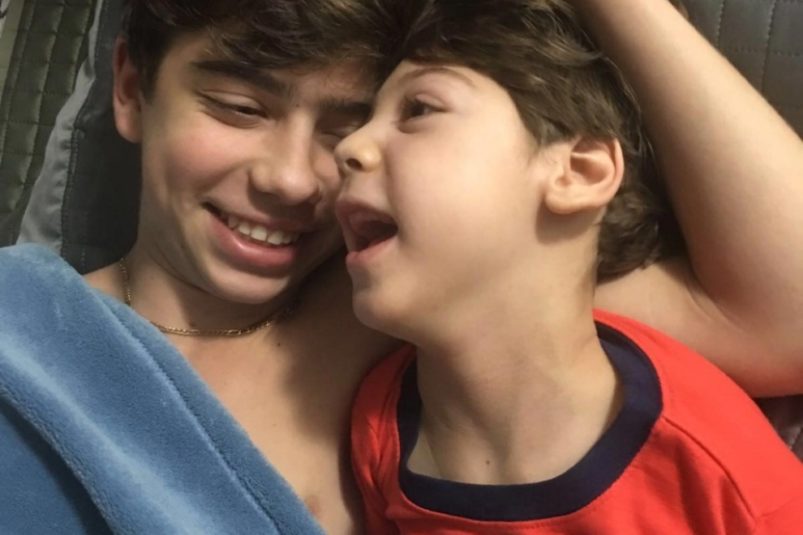 “There is a moment of pain, of despair; that is normal,” she said, referring to when she discovered her son had microcephaly, a condition where babies are born with unusually small heads and often have associated brain damage.

“You want your child to do things and he cannot. But do not cry in front of your child, do not be unhappy in front of him. Because he already has so much trouble in his life, we must pass on joy and let him know that he is loved.”

The family lives in Pernambuco state in Brazil’s northeast, at the center of the current crisis over microcephaly. More than a quarter of the 404 confirmed and 3,670 suspected cases identified by officials in Brazil since October are here. Health officials believe the cases are linked to the spread of the tropical Zika virus, leading the World Health Organization to declare a global emergency this week.

Hundreds of mothers are now confronting the diagnosis, which can cause seizures as well as problems with vision, hearing, speech and movement. Davi and his family, though, have long been grappling with his condition. (About 150 cases were recorded in Brazil each year until the current crisis).

The failings of Brazil’s public health service — which officials here admit is unable to provide patients with sufficient doctors, equipment and infrastructure — are felt acutely by families of children with microcephaly, who typically need intensive physiotherapy, speech therapy and occupational therapy. Those are rarely, if ever, available.

“We are far from providing the high quality healthcare that Brazilians deserve,” said Dr. Jailson Correia, health secretary of the state capital Recife. Even most private health plans favored by the middle class here offer only limited coverage.

Advocates also say that prejudice against the disabled remains widespread. “When a disabled child is born in Brazil, the family is often alone,” said Claudia Werneck, a journalist who has become one of Brazil’s foremost voices on disabled rights through her NGO Escola de Gente. “And they remain alone because of the lack of support from politicians and segregation from society.”

“Microcephaly is now being presented in Brazil as this symbol of the worst thing that can happen to a child,” she added. “But there is no discussion of the rights of these children, of their future and how to make their lives better.”

There was no indication of Davi’s microcephaly, which was caused by the infection toxoplasmosis, before he was born by cesarean on Aug. 15 2011.

“He was a newborn who was suckling, eating, sleeping the same as any other baby,” his mother said, cradling him in her arms. “Except that, over the months, we saw other children would begin to notice their parents and look them in the eye. So, over the years, we began to realize that our child might not be able to do this.”

Today, Davi cannot yet walk, talk or eat solid foods. Sà, a dentist, and her husband, Cleitson Antônio Alves de Carvalho, a businessman, pay R$5,000 ($1,292) a month for physiotherapy, speech therapy and occupational therapy, which they say is crucial to his development.

Like most people of means, they have private health insurance on top of the state-supported health plan. But their private insurance pays for only a third of Davi’s therapy sessions, which he attends six times a week. In their town of Salgueiro, in the interior of Pernambuco state, the public health service would only pay for one treatment every two months, they say. The family sends Davi to a private school and has also paid for their home and the school to be adapted to his needs, with specialist chairs and baths.

They say the therapy has helped. “Before, when we walked into the room, he would keep looking at the same spot,” she said. “Today, when we enter the room, his eyes are already looking for us.”

The greatest challenge, though, is prejudice. Other families sometimes prevent their children from playing with Davi out of a suspicion that his microcephaly is contagious, his parents say. If there is a silver lining to the outbreak, Sà hopes it will be a heightened understanding of microcephaly.

“The whole world looks at him with pity,” she said. Yet, she says, “I find so much joy in the small victories … I am very happy with my son. I can laugh, be happy, play, have fun with him. I would not even ask God to heal my son, no. I would not ask him that.” Dressed in a red flowered shirt and pink plastic watch with her hair in a ponytail, Camila Maria dos Santos Barreto, 26, giggled as her father prompted her to speak.

Born with a head within the normal range, she was not diagnosed with microcephaly until a year after her birth. Hers is a relatively mild case; she can walk and talk and uses a mobile phone to stay in touch with her parents and friends. But she is unsteady on her feet, cannot read and is likely to remain dependent.

But the family, who live in a small rental apartment on the outskirts of the state capital, Recife, have struggled to afford the doctors, therapy and swimming lessons she needs. They say the public health service offered nothing towards these costs.

“We labored day and night,” said her mother, Arineuma Ilma dos Santos Barreto, who worked as an accountant during the day and made cakes to sell at night. Her husband frequently had to travel as part of his job with a restaurant company.

The state, they say, did not provide any help. “It was very difficult,” he said. “But we opted to work harder for her. We tried to give her the best. That’s what all parents do.”

Their efforts paid for up to four therapy sessions a week, which they believe were crucial in Camila learning to walk. Now, as an adult, she still studies at the nonprofit Association of Parents and Friends of Exceptional Children, where they do not pay fees and her parents fought for years to get her a place. Her father is now building a home close to the school so she can attend more easily.

“She adores children,” her mother said, adding that her daughter enjoys films such as ‘Snow White and the Seven Dwarfs’ and playing with her 1-year-old German shepherd called Rex. She washes the dishes, sweeps the house, makes her bed and answers the phone. Someday, she’d like a boyfriend.

At times her condition upsets her. “I would read to her in the morning,” her mother said. “And sometimes when I wasn’t there she would pick the book up and cry.” Her parents still hope she will eventually learn to read.

“Have hope,” Barreto counsels those whose newborns are being diagnosed with microcephaly. “It is frustrating. But never give up.”