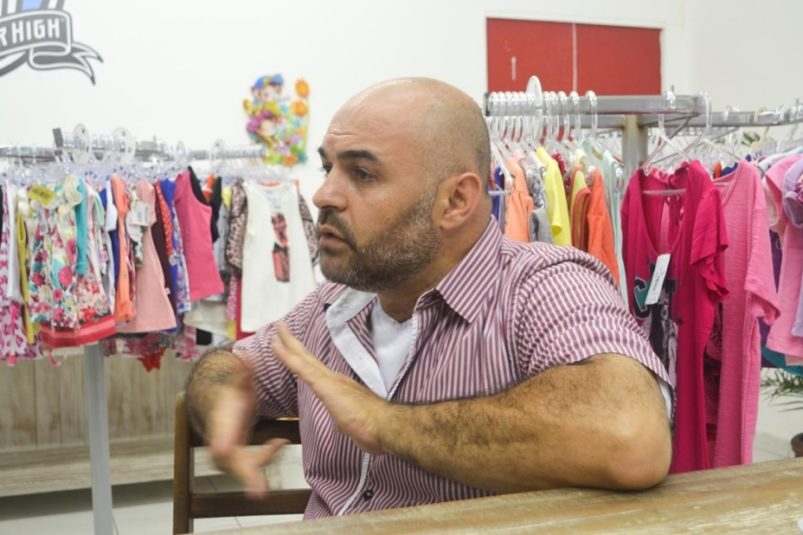 Three-year-old Mirna held a doll in one hand and played with her tangled coffee-colored hair in the other. She flashed a smile and asked, “Tudo bem?”

The ubiquitous Brazilian greeting was expressed with its trademark positivity. Mirna, who was born in Damascus three months after the start of the Syrian civil war, is learning Portuguese fast.

Having arrived in Latin America’s largest city just weeks before, for the first time in her life she was enjoying being out in the sunshine and meeting new people. Before, she remained hidden with her family in their home, hearing it shake with every nearby explosion.

Brazil took in 1,400 refugees from Syria in 2014, according to the country’s National Center for Refugees, making them the country’s largest refugee population. The total number is said to be much higher once those Syrians not yet granted asylum are included and is believed to be the largest in the Americas.

Although the largest group of refugees in Brazil, they represent just a tiny fraction of the estimated 3 million Syrian refugees worldwide. Lebanon and Turkey are estimated to have more than a million each, with hundreds of thousands more in Jordan, Iraq and Egypt.

Still, the figures released earlier this month show that Syrians now outnumber Angolan and Colombian refugees in a country not known for recent mass immigration.

The war in Syria is believed to have killed more than 200,000 people. While many Western countries have closed or only cracked open their doors, Brazil agreed last year to expedite its refugee process out of sympathy for Syrians’ plight, making the country a realistic destination for many.

Other South American countries have also opened their doors to Syrian refugees, with an official count of 300 in Argentina, 120 in Uruguay and 19 in Colombia. In Brazil, the refugees say they have experienced none of the anti-immigrant sentiment reported in Europe.

Mirna arrived in Brazil with her family — father Nasser, 32; mother Zinat, 29; and uncle Basrel, 25 — at the end of October after a long struggle to find a country willing to take them in. They asked that their last names not be used to avoid retribution against their family members still in Syria.

They left Syria 18 months ago to avoid the prospect of military service in the civil war. “I worked in Daraa, which is where the uprising started,” said Nasser. “I feared that if I was conscripted, I would be killed by the government forces, as they believe that anyone who has any connection to Daraa — who has ever been there — must be an enemy of the state.”

The family first settled in Lebanon, and tried successfully to gain asylum in Spain, France, Germany, Italy, the United States and Canada. Although Brazil wasn’t their first choice, they jumped at the chance when it arose, and the four traveled from Beirut to Abu Dhabi to São Paulo.

They brought only clothes, documents and cash to last a few months.

In the chaos of Brazil’s Federal Police offices on the outskirts of São Paulo as they tried to register their arrival, the family looked every one of the 6,726 miles they were from home. In a crowded seating area, they waited for their documentation to be approved by one of many clerks seated behind a multitude of counters.

But even that far away, the fear of the civil war still echoes. While sitting at a cafe across the street from the police offices, the family identified the customers at the next table as supporters of Hezbollah, which support the Syrian government in the war. They fearfully requested to change seats, moving to a section far down the street.

Brothers Nassera and Basrel are refugees twice over, being the descendants of Palestinians who were displaced to Syria in 1967. “I dream of Palestine, but I have never been,” Nasser said. “I only hope my daughter does not grow up with the same dreams of Syria.

“We cannot imagine being able to go back, not even in 10 years. We want to bring all our family here. We are in Brazil now. This is the first step to building our future.”

Adapting to the remarkably different culture and customs — from an almost landlocked ancient Arab-dominated kingdom to the world’s largest Catholic nation, with more than 3,000 miles of beaches and a hedonistic streak — has been a challenge. But there have been surprises too.

“Many people have been very kind to us here,” Zinat said. “They love children. Babies are so much more welcome than in Syria. Here they love the baby. They will always stop and talk to her on the bus or train.”

Used to Arabic cuisine, the family said they have developed a taste for Brazilian barbecued meat. But the habit of São Paulo natives of kissing as a greeting still comes as a surprise.

“We have high hopes for Brazil,” Basrel said. “But we miss everything about how Syria was before the war. How it would be completely safe late at night on the streets. Syrians earn little, but Syria was so cheap. Here it is expensive, and we don’t know how much we will earn.”

With more relatives planning to join them in Brazil, the family is searching for a two-bedroom apartment to house seven people — a far cry from their three-story home that housed their entire extended family in Syria.

Like hundreds of Syrian refugees before them, they were helped greatly on their arrival by Amer Mohamad Masarani, a Syrian expat for 18 years and businessman who is at the center of the Syrian community in São Paulo.

“I came to sightsee [18 years ago],” said Masarani, 42. “But I drank the water of Brazil and ended up never returning to Syria. Brazil is a good land. Many people who come here end up staying.

He said that shortly after the revolution began, friends began calling about the possibility of seeking refuge in Brazil. Initially it was mainly Syrians who had already lived in the country. So in August 2011 he created a Facebook page. “Now anyone in Syria who wants to come to Brazil contacts me,” he said.

Masarani, who has 70 mobile phone SIM cards, said he gives one to each new arrival and tells them to call him if they find themselves in trouble. “I don’t want to lose any of them,” he said. “They do not speak Portuguese, and I do not want them disappearing and ending up living on the street.”

But he too has felt the backdraft of the brutality in Syria, despite the distance from his homeland. “I’ve received threatening messages because I am helping Syrians who want to leave the country,” he said. “My name is at the airport in Damascus, I am sure. If I return, I am sure they will arrest me. Luckily, my whole family is already here.”

Masarani, who runs two clothing shops in a bohemian neighborhood of the city, estimated that the number of Syrian refugees in Brazil will eventually reach 3,000 once the cases of those who arrived on tourist visas and applied for asylum are processed.

“Few come with money,” he said. “When the bombing started, many left their homes in a hurry with just their documents and clothes. Most of the doctors, lawyers and engineers cannot validate their qualifications in Brazil. I am afraid people will end up on the streets.

“Many want to study but do not have a birth certificate that they need to register. I have already asked the Brazilian authorities to find a way to replace these documents, because people cannot go to the embassy. They could be arrested. They fled. They cannot go there.”

While ingredients for Brazilian meals are very different from those for Syrian food, Masarani said the refugees quickly begin to make Arabic meals. “Interestingly, when we will distribute food, they take anything except for beans. They do not know beans. We have no beans in Syria.”

A much tougher part of assimilation, he said, is learning the language. And some new arrivals still bear the psychological scars of the war.

“One family came with a 2-year-old daughter,” he said. “They arrived on the day that Corinthians [a São Paulo soccer team] won the Copa Libertadores in 2011. When Corinthians won, their fans set off many fireworks, and the girl hid under the kitchen table and began to cry.”

Ahmed al-Mazloum, a 28-year-old biomedical engineer, left his family in Damascus, traveled alone to Brazil and became fluent in Portuguese in a matter of months. As with many Syrians, Brazil wasn’t his first choice, but he doesn’t regret his decision.

“I would have gone anywhere to start a new life,” he said. “I tried many countries. Then I met a friend who has an uncle in Brazil. We talked and decided to come to São Paulo.”