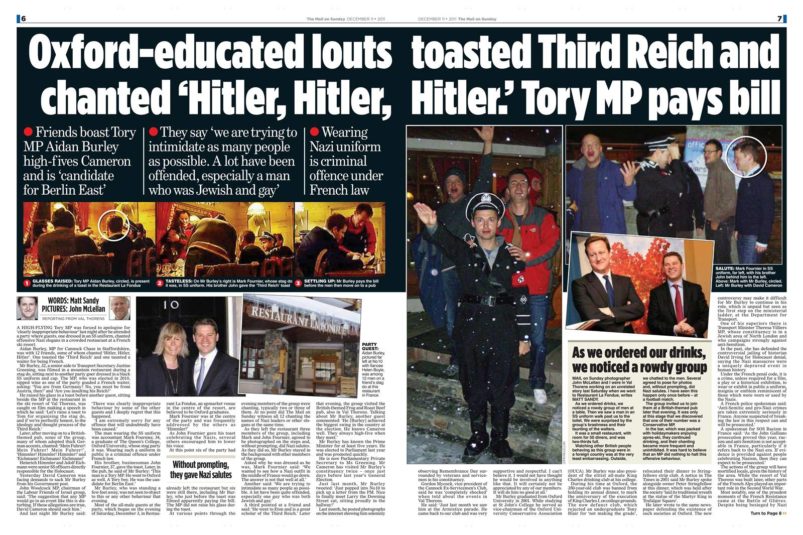 Tory MP and a toast to the Third Reich

A HIGH-FLYING Tory MP was forced to apologise for ‘clearly inappropriate behaviour’ last night after he attended a party where guests, one dressed in an SS uniform, chanted offensive Nazi slogans in a crowded restaurant at a French ski resort.

Aidan Burley, MP for Cannock Chase in Staffordshire, was with 12 friends, some of whom chanted ‘Hitler, Hitler, Hitler’. One toasted the ‘Third Reich’ and one taunted a waiter for being French.

Mr Burley, 32, a senior aide to Transport Secretary Justine Greening, was filmed in a mountain restaurant during a stag do, sitting next to another party goer dressed in a black SS uniform and cap. The MP, who was elected in 2010, sipped wine as one of the party goaded a French waiter, asking: ‘You are from Germany? No, you must be from Austria, then?’ and ‘Are you insulting his Reich?’

He raised his glass in a toast before another guest, sitting beside the MP at the restaurant in the ski resort of Val Thorens, was caught on film making a speech in which he said: ‘Let’s raise a toast to Tom for organising the stag do, and if we’re perfectly honest, to the ideology and thought process of the Third Reich.’

John Woodcock MP, chairman of the Labour Friends of Israel group, said: ‘The suggestion that any MP would go to an event like this is disturbing.If these allegations are true, David Cameron should sack him.’

And last night Mr Burley said: ‘There was clearly inappropriate behaviour by some of the other guests and I deeply regret that this happened.

‘I am extremely sorry for any offence that will undoubtedly have been caused.’

The man wearing the SS uniform was accountant Mark Fournier, 34, a graduate of The Queen’s College, Oxford University, whose stag party it was. Wearing such a uniform in public is a criminal offence under French law.

His brother, businessman John Fournier, 37, gave the toast. Later, in the pub, he said of Mr Burley: ‘This man is a Tory MP. He went to Oxford as well. A Tory boy. He was the candidate for Berlin East.’

Mr Burley, who was standing a few feet away, was not seen to object to this or any other behaviour that evening.

Most of the all-male guests at the party, which began on the evening of Saturday, December 3, in Restau-rant La Fondue, an upmarket venue in the centre of the resort, are believed to be Oxford graduates.

Mark Fournier was at the centre of the party and was frequently addressed by the others as ‘Himmler!’

As John Fournier gave his toast celebrating the Nazis, several others encouraged him to lower his voice.

At this point six of the party had already left the restaurant but six were still there, including Mr Burley, who just before the toast was filmed apparently paying the bill. The MP did not raise his glass during the toast.

At various points through the evening members of the group were chanting, typically two or three of them. At no point did The Mail on Sunday witness all 12 chanting the names of Nazi leaders or other slogans at the same time.

As they left the restaurant three members of the group, including Mark and John Fournier, agreed to be photographed on the steps and, without prompting, did Nazi salutes. As they did so, Mr Burley stayed in the background with other members of the group.

Asked why he was dressed as he was, Mark Fournier said: ‘We wanted to see how a Nazi outfit in the middle of France would go down. The answer is not that well at all.’

Another said: ‘We are trying to intimidate as many people as possible.A lot have been quite offended, especially one guy who was both Jewish and gay.’

A third pointed at a friend and said: ‘He went to Eton and is a great scholar of the Third Reich.’ Later that evening, the group visited the British-themed Frog and Roast Beef pub, also in Val Thorens. Talking about Mr Burley, another guest commented: ‘He [Burley] achieved the biggest swing in the country at the election. He knows Cameron well. They always high-five when they meet.’

Mr Burley has known the Prime Minister for at least five years. He was elected to Parliament last year and was promoted quickly.

Just last month, Mr Burley tweeted: ‘Just popped into No10 to pick up a letter from the PM. Nice to finally meet Larry the Downing Street cat, sitting proudly in the hallway!’

Last month, he posted photographs on the internet showing him solemnly observing Remembrance Day surrounded by veterans and servicemen in his constituency.

Gordon Mycock, vice president of the Cannock Ex-Servicemen’s Club, said he was ‘completely shocked’ when told about the events in Val Thorens.

He said: ‘Just last month we saw him at the Armistice parade. He came back to our club and was very supportive and respectful. I can’t believe it. I would not have thought he would be involved in anything like that. It will certainly not be appreciated by any of our members. It will do him no good at all.’

Mr Burley graduated from Oxford University in 2001. While studying at St John’s College he served as vice-chairman of the Oxford University Conservative Association (OUCA). Mr Burley was also president of the elitist all-male King Charles drinking club at his college.

During his time at Oxford, the 350-year-old club was banned from holding its annual dinner, to mark the anniversary of the execution of King Charles I, on college grounds. The now defunct club, which rejected an undergraduate Tony Blair for ‘not making the grade’, relocated their dinner to Stringfellows strip club. A notice in The Times in 2001 said Mr Burley spoke alongside owner Peter Stringfellow at this dinner, which was held after the society ‘laid its traditional wreath at the statue of the Martyr King in Trafalgar Square’.

He later wrote to the same newspaper defending the existence of such societies at Oxford. The new controversy may make it difficult for Mr Burley to continue in his role, which is unpaid but seen as the first step on the ministerial ladder, at the Department for Transport.

One of his superiors there is Transport Minister Theresa Villiers MP, whose constituency is in a Jewish area of North London and who campaigns strongly against anti-Semitism.

In the past, she has defended the controversial jailing of historian David Irving for Holocaust denial, saying the Nazi massacres were a uniquely depraved event in human history.

Under the French penal code, it is a crime, unless required for a film, a play or a historical exhibition, to wear or exhibit in public a uniform, insignia or emblem reminiscent of those which were worn or used by the Nazis.

A French police spokesman said: ‘Anti-Semitic and pro-Nazi crimes are taken extremely seriously in France. Anyone suspected of breaking the law in this respect can and will be prosecuted.’

A spokesman for SOS Racism in France said: ‘As the John Galliano prosecution proved this year, racism and anti-Semitism is not acceptable in France, particularly if it refers back to the Nazi era. If evidence is provided against people celebrating Nazism, then they can expect to be prosecuted.’

The actions of the group will have mortified locals, given the history of the area. While the resort of Val Thorens was built later, other parts of the French Alps played an important role in the Second World War.

Most notably, one of the proudest moments of the French Resistance came at the Battle of Glières. Despite being besieged by Nazi forces, starvation and the cold, 450 resistance fighters managed to collect three RAF parachute drops including hundreds of packages of explosives, weapons and grenades.

A spokesman for St Martin de Belleville council, which covers Val Thorens, said that the resort was ‘largely a law-abiding one’ and that he was ‘shocked’ to hear that apparently pro-Nazi celebrations had been taking place there.

Until now, Mr Burley has had an unblemished if colourful record in politics. Born in New Zealand to British parents, he was brought up in Birmingham, where he attended the £9,795-a-year West House prep school and then the prestigious King Edward VI grammar school.

Standing as a mock election candidate in 1997, he promised pupils at the all-boys school he would open a joint dining hall with the girls school next door and privatise the tuck shop. His slogan read: ‘Freedom. Choice. Girls.’

He won by a landslide but had to apologise afterwards as he did not have the power to enact either promise.

After graduating he worked as a researcher for Philip Hammond MP before joining Accenture as a management consultant. He became a councillor in Hammersmith and Fulham aged 27.

By this time, he already knew Mr Cameron, then leader of the Opposition.The pair were seen laughing and joking like old friends at a photo call about the state of the housing market in March 2006.

In last year’s General Election he won the Cannock Chase seat from Labour with a swing of 14 per cent, the largest from Labour to the Conservatives in the country.

This result may have been helped by Mr Cameron’s visit six days before the Election.

The pair were seen joking together on a tour of a school.

Mr Burley became the sixth youngest Tory MP and the 21st youngest overall. In January, he was made a Parliamentary Private Secretary to Mr Hammond – then Transport Secretary.

His appointment came just a week after Mr Cameron had paid a second visit to his constituency.

When Ms Greening was appointed Transport Secretary in the October reshuffle, he kept his job. He also serves on the Home Affairs Select Committee.

He is due to marry television fashion presenter Helen Boyle, 32, after proposing on the roof of the Palace of Westminster. He had hidden a bottle of champagne and two glasses amid the neo-gothic spires.

Last week, Mr Cameron personally backed Mr Burley’s Trade Union Reform Campaign, which seeks to find out how many trade union staff are paid for out of public funds, and campaign against the practice.

In an entry on Mr Burley’s website , dated June 21 this year, he describes a visit to Israel. He writes: ‘Most movingly of all we visited Yad Vashem, Israel’s Holocaust memorial museum, which was an emotional and heartrending experience seeing the exhibits and hearing the stories of the Jews during the Second World War.’

Last night John Fournier said: ‘[Mark Fournier] was dressed up in an outfit as a tongue-in-cheek laugh and there was nothing more to it than that. It was just a bunch of lads having a good evening.’

Asked if he raised a toast to the ideology of the Third Reich, he replied: ‘Of course we didn’t. I’m really sorry I’ve got to go because we have a party to go to, which isn’t a Third Reich party, but good luck to you.’

He then hung up before it could be pointed out a video exists that clearly shows him making that toast.

Mark Fournier did not respond to repeated requests for comment.